The Secret Lives Of Deer 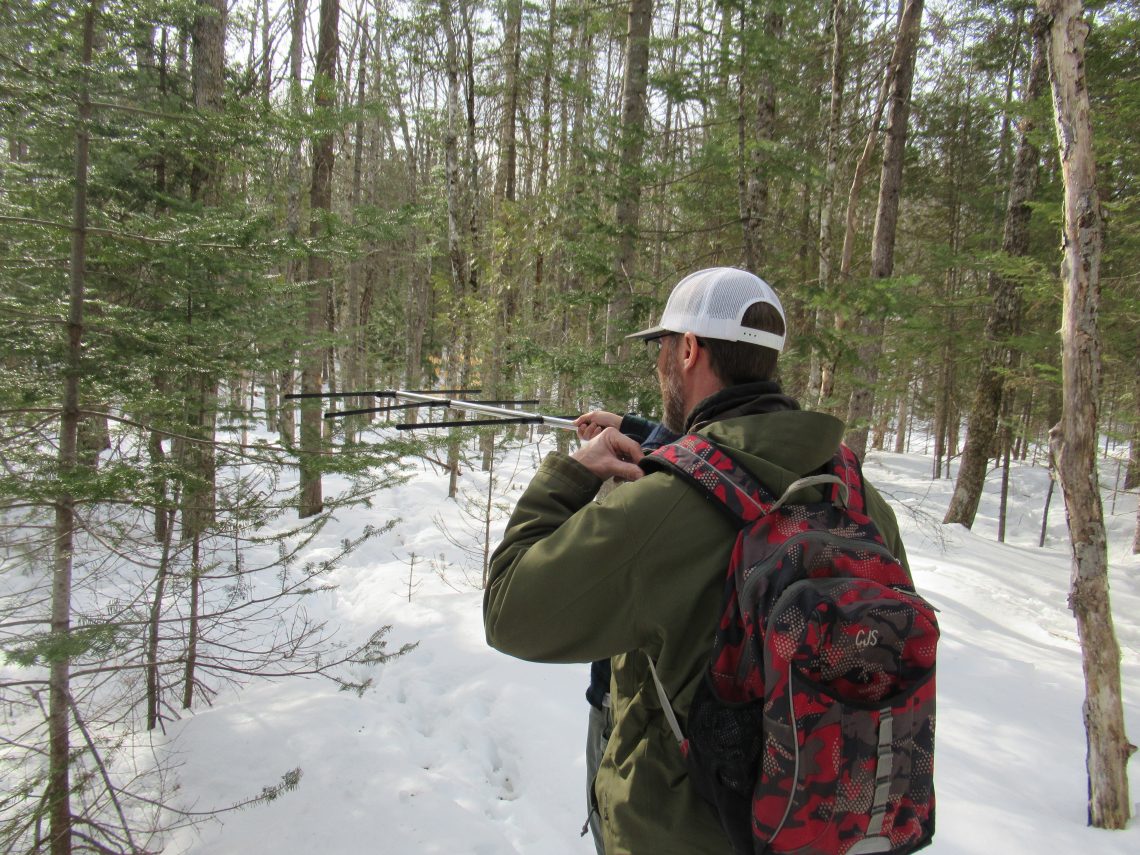 It’s no secret that deer populations in northern and Downeast Maine have struggled in recent decades.  Changes in land use and forest management objectives, and pressure from predators, have degraded habitat quality for deer and reduced populations to a fraction of their abundance in the early and mid-twentieth century.  Since its first land purchase in 2005, Downeast Lakes Land Trust has tailored its land management practices to benefit the wildlife of the Downeast Lakes region, and deer, as a species that figures prominently in local culture and the recreation-based economy, have been a particular focus of management efforts.  For these reasons, the white-tailed deer was identified as one of the Focus Species highlighted in DLLT’s Focus Species Forestry Plan.  Forestry practices rooted in science and informed by traditional local knowledge, often with financial and technical support from agencies such as the Maine Department of Inland Fisheries and Wildlife and the Natural Resources Conservation Service, have been implemented widely in the Downeast Lakes Community Forest, where more than 14,000 acres have been designated as focus areas for deer. 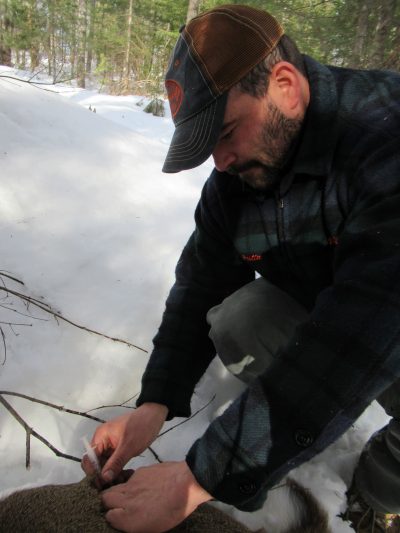 PWD’s Justin Socobasin delivering the tranquilizer reversal prior to release.

Now, DLLT is working in partnership with the Passamaquoddy Wildlife Department (PWD) to study how deer travel through the forests and lakes of the region, and where crucial habitat can be protected or enhanced to benefit deer populations. The Passamaquoddy Tribe began this research in 2017 when, supported by a Tribal Wildlife Grant from the U.S. Fish and Wildlife Service, tribal biologists fitted 20 deer wintering at Indian Township with GPS tracking collars.  The collars enabled the department to follow the movement of deer out of their wintering areas and into summer fawning and fawn-rearing habitat throughout the Downeast Lakes region, offering valuable insights into the behavior of the local deer herd.

Building upon the Passamaquoddy’s experience in the initial year of the study, DLLT has purchased two GPS tracking collars, which were deployed in Grand Lake Stream by DLLT and PWD staff in February 2019.  Two mature does were sedated using chemical tranquilizers, fitted with collars and plastic ear tags, and released back into the forest, none the worse for wear.  Trained biologists ensured the safety of the deer at all times, and the entire handling procedure was accomplished in less than 30 minutes per deer.  Already, the data collected from the collars is providing a fascinating depiction of the lives of deer in and around Grand Lake Stream in the wintertime, and local residents have enjoyed occasional glimpses of the two collared does as they visit backyards and woodlots all around town.  Soon, these deer will head into the community forest to find greener pastures for the summer, and it is hoped that they will each birth fawns, providing further insight into habitat selection for this crucial, and vulnerable, stage of their life cycle. 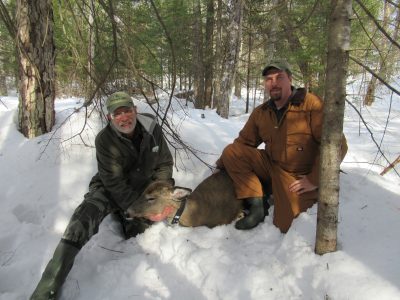 From left to right, DLLT’s Ernest Carle and David Montague with a doe before the release.

“This project will provide valuable information to forest managers in the region,” said DLLT President and CEO David Montague.  “It will help us to improve our habitat management techniques and positively affect deer populations in the long term.  We’re happy to partner with the Passamaquoddy Tribe, building upon their innovative wildlife research and working together to improve the management of a truly beloved wildlife species in Downeast Maine.”

The results of this joint project will be shared with the Northeast Deer Research Partnership, a coalition of researchers from universities, government agencies, tribal governments, and industry land managers from across New Brunswick and Maine.  The Partnership seeks to gain a greater understanding of the factors influencing the deer population in New Brunswick and Maine, both areas where many would like to see more deer in the deep woods.  Through the Partnership, the data from the Downeast Lakes will be evaluated alongside similar research from Northern Maine and New Brunswick, assisting state, provincial, and tribal wildlife biologists in their efforts to manage deer populations responsibly.

DLLT and PWD already are planning to expand the deer collaring work in 2020, pooling resources to deploy more GPS collars in Grand Lake Stream and Indian Township to support enhanced habitat management in the region.  Through these and other efforts, we can all look forward to a future when Downeast deer herds will return to their historically robust population levels.