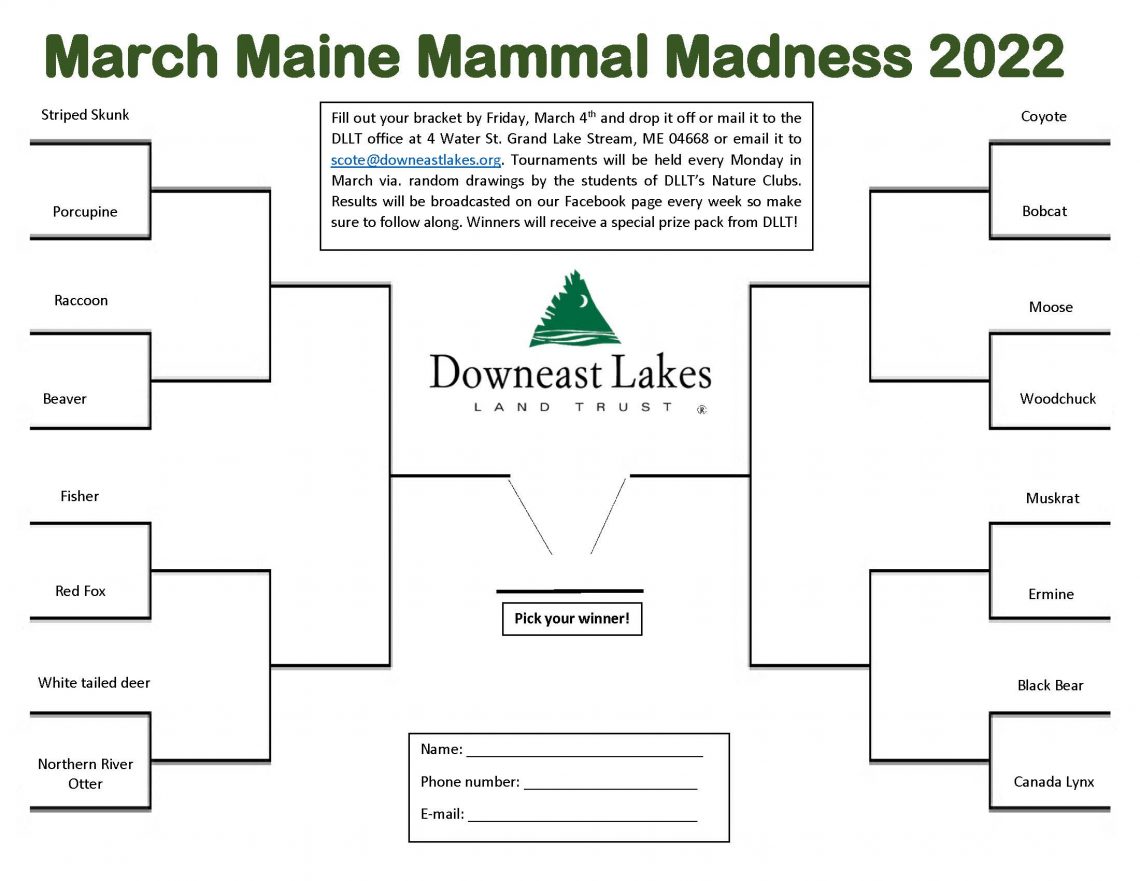 It’s everyone’s favorite time of the year – March Madness! No, not college basketball…. Here at DLLT, we have our own form of fun “madness.”  This year, we are asking you to pick your winners from our very own bracket comprised of all of our fuzzy friends and woodland residents.  Brackets must be filled out and submitted to DLLT before March 4th, when the first round will be decided.  The “winning” animal for each match up will be randomly chosen by DLLT Education and Volunteer Coordinator Sarah Cote’s Outdoor Club students.  We will decide each round on every Monday in March, with the winner being announced on March 28th.  The bracket with the most correct picks will win a DLLT prize pack – Good luck!!!

The competitors met in the Downeast Lakes Community Forest for the start of the March Madness battle….

SKUNK – The first to arrive was one of Maine’s stinkiest mammal competitors: the striped skunk. Joining the skunk is Maine’s prickliest competitor: the North American porcupine. Both mammals duked it out, but the powerful stench of the striped skunk beat out the porcupine.

RACCOON – The second battle was an interesting one between nature’s famous forest bandit and the aquatic engineer. The battle quickly moved from the lake to the trees where the beaver stood no chance against the forest-dwelling raccoon.

FISHER – Up next was a battle between two furry predators: the fisher and the red fox. This battle was close matched but the fisher won at the last minute with its powerful jaws and fast speed.

BOBCAT – The critters of the forest went silent as the next round of competitors took the stage: the coyote vs. the bobcat. A tale as old as time – will the dog chase the cat or will the cat pull out its claws? In this case the bobcat chased the coyote right out of the forest.

MOOSE – The antlers were really flying in the next battle as the moose took on a woodchuck. Size may definitely play a factor in this battle but you can’t forget the speed, ability to dig underground, and the large teeth of the woodchuck. In the end, the woodchuck was just no match for the power of the moose.

MUSKRAT – What the next two competitors lack in size, they make up for with their spunky personality. The battle between the muskrat and ermine went on for over an hour until the battle pursued underwater where the muskrat proved to be the victor.

BLACK BEAR – Last, but not least, was a battle between Maine’s largest predators- the black bear and the Canada lynx. These two competitors were evenly matched for sure but in the end the black bear took the cake.

SKUNK – The skunk and raccoon were the first to battle yesterday evening. The raccoon showed some teeth but in the end it was just no match for the powerful spray of the striped skunk.

FISHER – The white-tailed deer stood it’s ground against the fisher but when the battle moved to the tree tops, the fisher’s domain, the deer stood no chance.

BOBCAT – The battle between the moose and the bobcat was one for the books, claws and antlers were flying, but the moose just couldn’t keep up with the speed and agility of the bobcat.

BLACK BEAR – The black bear and muskrat took on each other in a short battle that ended with the muskrat retreating back to it’s home in the pond and the bear was declared the winner.

THE FINALS ARE SET!

FISHER VS. BOBCAT – This week in the mammal madness battles, two species claimed their spots in the finals: Fisher and Bobcat. The pungent spray of the striped skunk was no match for the fisher who managed to pin its opponent and flip it over without hesitation. The favorite to win it all- the Black bear put up a good fight but in the end was no match for the speed, agility, and ferocity of the sly bobcat.

Thank you to everyone for playing! Wait ’til next year, when we have more March Maine Mammal Madness!!!!!