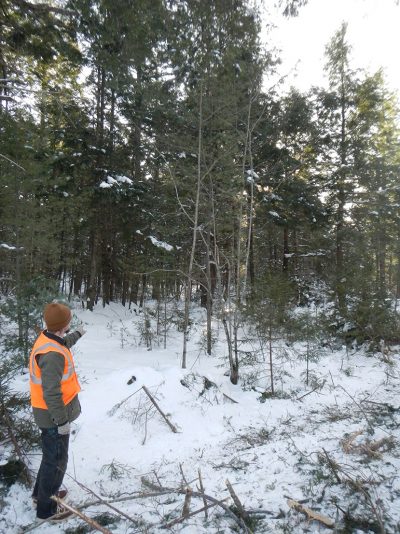 By incentivizing sustainable harvest and natural forest management practices that achieve denser, bigger, older and a diverse mixture of native tree species, the California Forest Protocol fosters the sequestration of additional forest carbon above and beyond the anticipated baseline, which is the carbon stocks that would be expected under typical commercial forest management for the 100-year duration of the project. The protocol provides detailed and rigorous standards for forest projects to earn offsets for the additional carbon in its reservoir, addressing the project’s eligibility, management, monitoring and calculation requirements. Eligible management activities include increasing the stocking of trees on understocked areas, increasing the overall age of the forest by increasing rotation ages, increasing forest productivity by thinning diseased and suppressed trees, and managing competing brush and short-lived forest species. Forest owners are required to protect the forest for at least 100 years.

Downeast Lakes Land Trust began evaluating its potential to participate in the carbon market in 2009, and entered a partnership with Finite Carbon in 2010.   Finite Carbon Corporation is a forest carbon development company that partners with landowners to create and monetize carbon offsets.

In September 2012, Downeast Lakes Land Trust and Finite Carbon registered the project with CAR as an improved forest management project under the CAR Forest Project Protocol 3.2 and received an initial issuance of nearly 200,000 compliance-eligible carbon offsets.  This was the first Improved Forest Management carbon project outside California registered with CAR.

In March 2013, the project was among the first forest carbon offset projects listed by the California Air Resources Board (ARB) as an “Early Action” project for the ARB greenhouse gas emissions trading program.  Early action project listing required dual third-party verification, which was achieved for the Farm Cove project with a second verification by Environmental Services, Inc.

On November 13, 2013, the California Air Resources Board (ARB) issued nearly 200,000 offset credits for the Farm Cove project.  This was in the first issuance of compliance forestry offsets for the California emissions trading program.  Downeast Lakes Land Trust and Finite Carbon jointly announced the issuance.  The initial offset credits have been sold to California compliance buyers in transactions totaling more than 2 million dollars.

In 2012, DLLT raised funds enabling the Lyme Timber Company to grant a conservation easement to the state of Maine on 22,000 acres of forestland. The easement permanently protects the property from development and ensures sustainable timber management.

Following the success of the Farm Cove Carbon Project, DLLT worked with Finite Carbon and the Lyme Timber Company, a private timberland investment management organization, to develop another improved forest management project on 22,000 acres in Grand Lake Stream Plantation. At the time of project development, the land was owned by the Lyme Timber Company, and DLLT had raised funds to secure an option agreement to purchase fee title to the land as part of a $19.4 million capital campaign. Lyme, DLLT, and Finite Carbon partnered on the project, with the bulk of the revenue functioning as a credit to reduce the purchase price of the land for DLLT in exchange for accepting the 100-year commitment to maintain carbon stocks in accordance with the California Compliance Offset Protocol for U.S. Forest Offset Projects. The project was listed with the California Air Resources Board, and from September 2013 to September 2015, the Lyme Grand Lake Stream Forest removed and sequestered an additional 599,217 metric tons of carbon dioxide equivalent (CO2e) emissions through its improved forest management practices. These credits were issued by ARB in August 2016 and sold to a California compliance buyer.

The sale of carbon offsets helped the Downeast Lakes Land Trust purchase the 22,000-acre property from Lyme Timber, which was added to DLLT’s preexisting Farm Cove Community Forest to form the Downeast Lakes Community Forest. Carbon offsets enabled a small, rural community land trust to conserve a large amount of land, protecting it from fragmentation and conversion to other uses. The project guarantees environmental benefits while creating a revenue stream for conservatively managed timberlands.