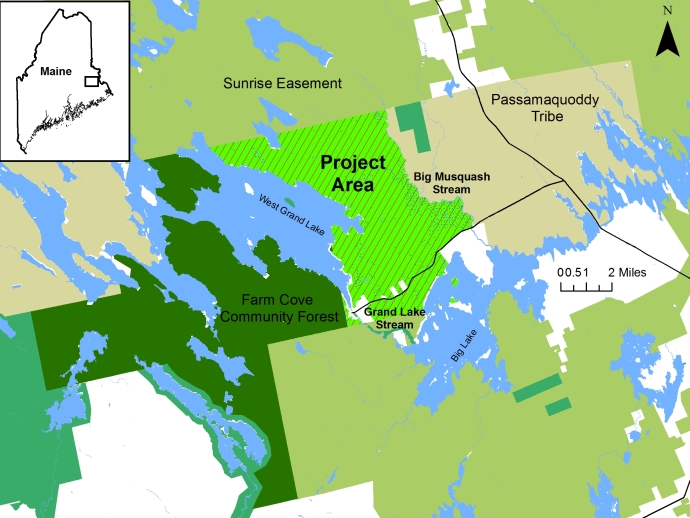 The Downeast Lakes Land Trust (DLLT) is pleased to announce the acquisition of the 21,870 acre West Grand Lake Community Forest (WGLCF), completing an eight-year, $19.4 million campaign and fulfilling a 370,000 acre community-led conservation vision in the Downeast Lakes region.  The land was purchased from The Lyme Timber Company of Hanover, NH, and protects over 17 miles of lake shore and over 90 miles of stream shore.  Bordering Big Musquash Stream on the eastern side and West Grand Lake on the western side, the WGLCF adjoins the Farm Cove Community Forest to the west and the Sunrise Easement to the north and south.  The WGLCF will be combined with DLLT’s adjoining Farm Cove Community Forest to form more than 55,000 acres of land owned and managed by DLLT.

“As with all its holdings, with this latest acquisition, the Trust affirms its commitments to permanent public access, to traditional use, to wildlife habitat, and to sustainable forestry,” said DLLT Board President Sydney Lea.

Founded in 2001, DLLT contributes to the long-term economic and environmental well-being of the Downeast Lakes region through the conservation and exemplary management of its forests and waters.  The WGLCF is a key parcel of a larger network of conserved lands that stretches across two nations and totals more than 1.4 million contiguous acres.  Included in the WGLCF is the 7,100 acre Amazon-Musquash Reserve and Special Management Area, with a conservation easement held by the Forest Society of Maine.

“This is a tremendous milestone for landscape-scale conservation in the Northeast,” said DLLT Executive Director David Montague.  “This would not have been possible without the hard work and generosity of a committed staff, volunteer board, and a diverse, nationwide network of supporters who recognize the unique natural and cultural heritage of this special place.”

The Downeast Lakes Land Trust thanks all supporters and donors for their generosity and passion for conserving the Downeast Lakes region.  The West Grand Lake Community Forest was selected as the #1 national priority for funding by The Forest Legacy Program of the U.S. Forest Service in 2011, which contributed over $5.5 million to the project.  The Land for Maine’s Future Board contributed $1.25 million toward the working forest easement purchase.  Many organizations and individuals contributed to the project, including major donations from the Elmina B. Sewall Foundation, The Conservation Fund, Sweet Water Trust, and the Open Space Institute.