A Meso What Now? 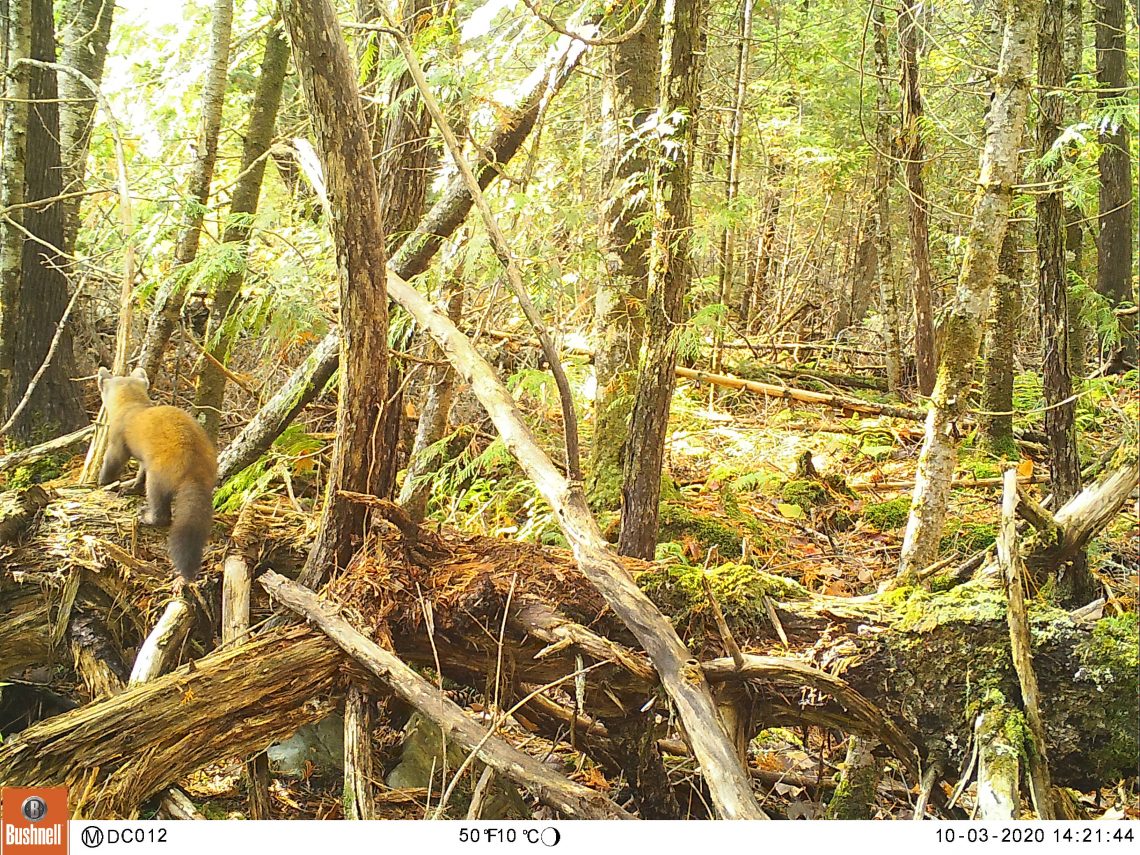 A Marten captured on one of DLLT's trail cameras.

Mesocarnivores are small to medium sized carnivore species who fill a vital niche in natural ecosystems.  Often, they have a generalized diet that consists of about 50-70% meat with the rest of the diet being composed of various nonvertebrate food items like vegetation or invertebrates. In some cases, mesocarnivores fill the niche from the extirpation of apex predators in the area and serve as the current top predator. Mesocarnivores are a fairly diverse group of animals and are often cited as being understudied in terms of their influence on ecosystems as a whole. Some mesocarnivore examples in the state of Maine include fishers, marten, bobcat, red fox, and raccoon.

Mammalogists studying mesocarnivores use resources some of you may have at home—a trail camera. They set up trail cameras out in the woods where they think their target species might be. When an animal walks in front of the camera, a sensor is triggered making the camera take a photo or video of the animal. Some researchers “bait” or “lure” their cameras with visual, auditory, or olfactory attractants, while others do not. This depends on the types of questions the researcher is asking. For example, if a researcher is studying whether a sensitive species like Canada Lynx occur in a particular area, they may put bait out to increase the chances of photographing that species. On the other hand, if a researcher is doing a behavioral analysis of a species, they might choose to leave the camera on its own without bait to have a view at behaviors that might not be attached to the pursuit of food.

But what does this have to do with DLLT? Great question! Mesocarnivores play an important role in the Downeast Lakes Community Forest and as such we monitor them using trail cameras. These species can provide many different ecosystem services including seed dispersal which aids in forest regeneration and trophic level regulations by keeping prey populations in check. The land trust follows a species-specific forestry practice meaning that we look at 12 umbrella species to manage for addressing the needs of multiple faunal genera. By managing our forests for these sensitive species, we are ensuring good management practices for more generalist species in the forest. American marten (Martes americana), a mesocarnivore, is one of those sensitive species we manage for.

American marten benefit from woody debris, vegetative cover, and diverse forests. They are seen as specialists in terms of forest cover requirements in comparison to relative species. Marten prefer areas dominated by old growth coniferous forests with diverse horizontal and vertical structures. They respond positively to a closed canopy cover and coarse woody debris (CWD). Features like CWD become important for the marten in completing their life cycles by providing areas to rear their young. By maintaining our forest in this way, we are also helping out white-tailed deer populations, fisher populations, and a number of other species.

If you see any mesocarnivores out in the Downeast Lakes Community Forest, tell us all about it on social media!